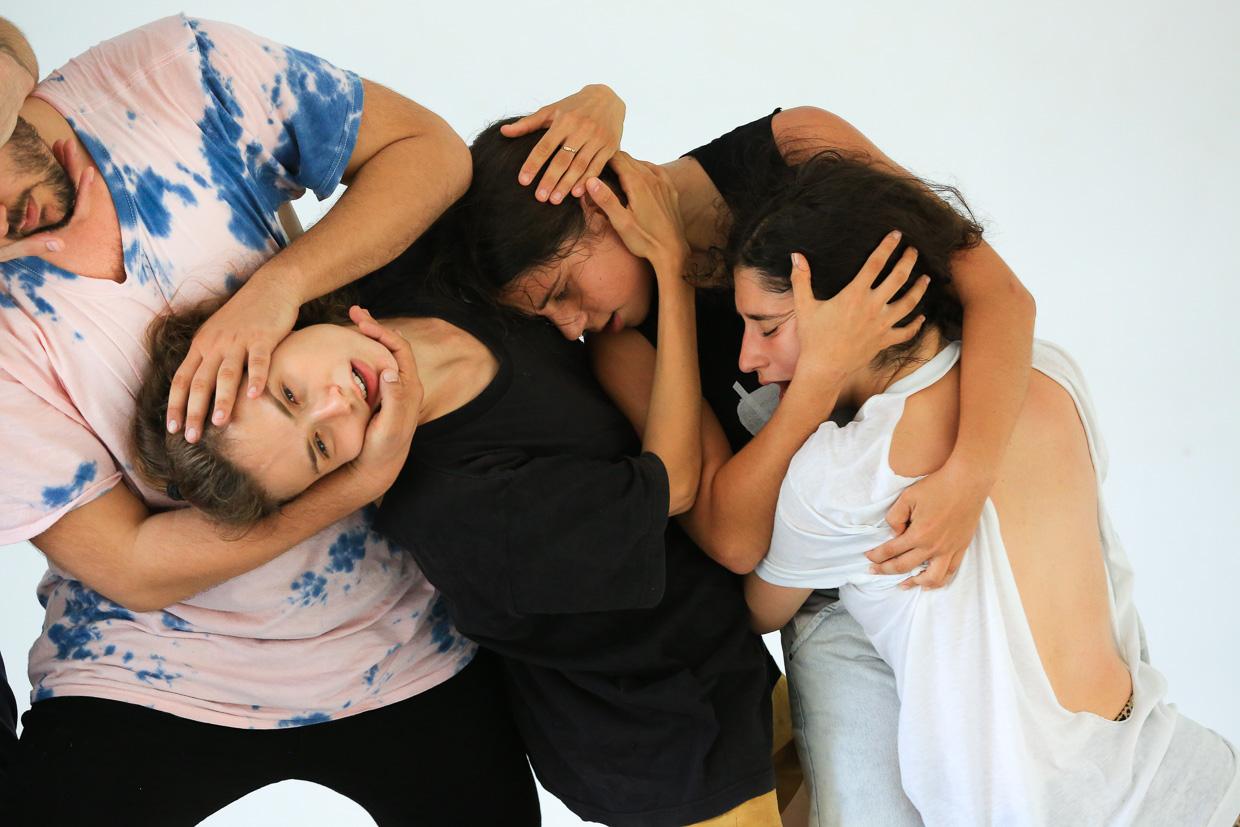 Can dance be a form of societal therapy? Katarzyna Słoboda talks to Yasmeen Godder as she prepares her show at Zachęta Gallery in Warsaw, where even the audience might become involved in the performance as a means of building interactive bidges between the ideologically opposed.

Katarzyna Słoboda: I would like to start with the piece that we will see in Zachęta entitled ‘Practicing Empathy’. Why were you interested in empathy in the practice of choreography?

Yasmeen Godder: These word has been used a lot today, but actually, for me, the reason I approached it was that people were starting to respond to some of my last works, specifically Common Emotions and also Simple Action. They were telling me that the empathy is coming out from those works. One writer entitled his text on Simple Action:‘Empathy Much Needed’. And I started to become curious about responding to this notion and asking myself questions on how we develop forms, action, rituals and interactions that take that under consideration in the very deep way. So, it’s almost like it came around in a circle – I made a work, and it created the response that there was empathy and from that, it continued into me wanting to deal with this issue.

KS: How can dance and choreography deal with social and political issues?

YG: At times, it may seem like dance is a bubble, but then, it does create a reality. When you pick a group of people, and you’re meeting them in the studio and whatever that is that you’re proposing inside that is affecting them and their lives. How can a process that we are going through together in the studio influence other aspects of life? With the second phase of Practicing Empathy, we are going to do a workshop with different communities to open up the process of learning from other people and other situations. So even before the work is being presented on stage, it has the potential to make gentle shifts in reality, to open us up as human beings and invite exchange with other people.

Over the years, I’ve been trying to see how the structures that I am working within can be challenged – I’m using them as a tool to exchange, to open up, to interact, to invite people who maybe would have never come to see this work to open rehearsals and discuss with them afterwards. With these kinds of activities, we are giving ourselves the opportunity to learn ­that we are not the ones with all the knowledge, but that we are interested in opening up the space of learning from each other instead.

The other level is the art making ­­ my work has dealt with the questions that I’ve had from the personal place but also looking through a bigger lens at things that are surrounding me on the political level, and especially in Israel, it is very difficult to ignore. Within the situation that exists, not making is a stance. My recent duet with Tomer Damsky Demonstrate Restraint is about growing up via this very militant extreme understanding of your body, soul and perception of self-being which are moulded by the military narratives that you’re living inside. How can I as a woman, performer, person living in this country use these same things and turn them into protest, into something that is challenging and breaking the noise of information and perhaps even speak through it?

I deal with politics, but I am also interested in speaking about it via my medium, which gives me a chance to open a dialogue on the level of the body and movement ­– I find it  limiting when I translate it into words. In Demonstrate Restraint, we used very provocative words that are very loaded in Israel, and we reclaimed them through our bodies, our voices.

KS: It works very well on the micro level whilst working with empathy, being attentive to those subtle relations between bodies while practising dance/choreography and then making the viewers more aware of how they themselves relate to each other. That is, for me, very political. And I think gallery spaces are a very interesting setting to transmit that – the proximity between viewers and performers is different than in theatre, the audience is freer to choose whether they want to stay or leave in the space. How is it different for you as a choreographer when you work in gallery spaces and not on the stage?

YG: In 2014, I was invited to make a work for The Petach Tikva Museum of Art that I titled CLIMAX. It was an interesting opportunity to deal with the notion of the museum, which often takes works from the past and shows it in the present. I wanted to retrospectively use only past works of mine and start to question how I deal with my own ‘museality’, but play with that on my own terms.

I invited a group of dancers to help me pick climactic moments from past works and learn these from video documentation, disregarding the original casting, gender and narratives. By placing these climactic fragments repetitively in unison, re-arranged in circular and linear forms, folk- like dances were created, in which people were invited to join at times but also to see them from different angles and perspectives.

It became interesting for me that the lexicon which was developed through different researches and processes, often around very personal themes, became content for a group connectivity with each other and with an audience. This evolved into a three-hour work that ran for quite a long time. It was an amazing experience for me to observe and share the transformations of states and physicality in the dancers from up close, unlike in a theatrical setting. It was also a way to learn how to let go of control – to accept the fact that people will choose how to view the work, taking into consideration that some of the details will not be seen. 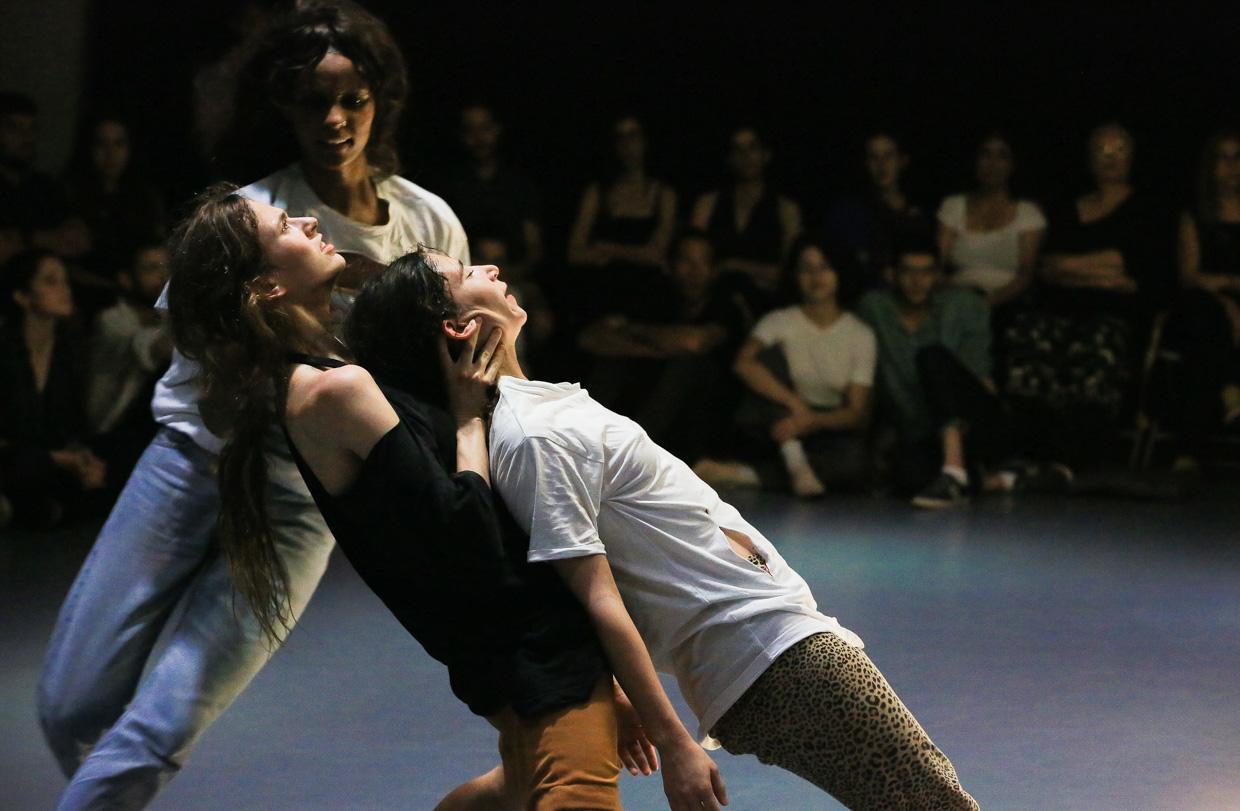 Over time, I discovered that this piece was also about choreographing the audience who is travelling inside our work. By moving in the space during the show, following the dancers, the audience was making choices and thereby becoming aware of their own spectatorship. And slowly, this also influenced the choreography and the strategy that we took within the work in regards to how to engage the audiences’ gaze, how to create curiosity, infectiousness and surprise. It also required a kind of flexibility and openness from the performers, as they never knew how people would respond or how people would place themselves in the space.

The other thing that I’ve learnt was a different kind of togetherness. At the end of CLIMAX, people would stay in the space with the performers even though the action was no longer happening. It was interesting to see how the museum space, which was filled for three hours with a proposed shared time between strangers, created a kind of connectivity which no longer depended on the performance itself and had a strong after-effect.

Since then, I’ve been wanting to bring this experience into theatre spaces. I’ve been dealing a lot with the idea of proximity, intimacy and engaging the audience as well as making them aware of their own perception during a performance. Even in Demonstrate Restraint, which is more a frontal piece, there is a moment where I open up a conversation with the audience about what they’re seeing. I am asking them to share some images that are coming up for them while watching the work. Some of the people share, and those images and thoughts go into the minds of other spectators, and that becomes a part of the narrative, interpretation and experience of the show. It creates a vulnerability in the piece because people can sometimes say really bizarre and even aggressive things.

KS: It might be a reason why in recent years, audiences in visual arts have become more and more interested in dance and choreography as a response to a lack of presence and connectivity. It also questions the way in which we approach art and the creative process. We are programmed to be judgmental and critical, but over the years, I’ve learnt that it’s important to be more supportive towards what is happening, to be open and let yourself experience the performance on different levels. It's also a question of how we programme cultural events in general ­­– do we do it for the experts or for the broader public?

YD: It relates to what you were asking before about how dance can be a political and social act. It is even in the viewing – people are frightened that they will not understand things. But dance in general asks the audience to open up new ways of perceiving, on the level of body and sensuality. Maybe that is a radical thing in our life to exercise. How to look at something without putting it immediately in a box of rationality? My work is not that abstract, but still, it is another format of dealing with things ­­– it asks you to look differently and plays with what we take for granted.

In my studio, we’ve had a dance for Parkinson’s programme for over five years now. Once a month, we have an open rehearsal of my work or we invite different independent artists who want to show work in progress to this group. After the run-through, we have an open discussion. And it’s been one of those elements of my artistic process that I find very important ­–­ having people who are very close to what we’re doing because they are there in the studio, they are taking classes, doing very advanced improvisation and have been exposed to methodologies that we’re working with. But at the same time, they are not the typical dance audience. I have learnt a lot from how they respond to what we propose. They have really interesting associations that we would not come up with otherwise. It gives me an interesting mirror.