The seventeenth edition of Gender Bender , a multidisciplinary festival produced by the Cassero of Bologna which, in the field of performance and contemporary dance, has also had the ability to gather some of the most radical artistic proposals related to to the themes that for almost twenty years he has investigated and told with great variety.

This year's edition opened with "Common Emotions" by the Israeli choreographer Yasmeen Godder , present on stage to invite the public to enter the work, which sees six dancers explore the relationships and emotions that arise within a group.
On the stage, a tangle of scrambled fabrics a bit at random divides the space into two parts; the public, in turn, is asked to go beyond this sort of tent to go to a "reserved area" following the indications of the performers, who propose different tasks or actions, so as to increase participation and change the point of view.

But what happens in that beyond for those who remain in the audience, watching everything happen simultaneously?
The strength of the work is right here: in this plural possibility of approach and fruition, which also implies giving everyone a completely personal and different experience. There are those who remain to observe, there are those who speak, there are those who embrace each other, all in many and unique points co-present in the performance.
On stage, the sounds and voices that come from this "reserved area" join the dialogue between some spectators sitting in a circle.
It is a generating force, even when, in general chaos, one of the performers continues to dance solitary, immersed in his own silence: a possible figure or allegory of the state of the art and the condition of the artist in it. It is still possible to do dance today, this choreographic choice seems to tell us: it is possible to do it without losing anything in terms of artistry, and dance itself is the first to be able to talk about this possibility.

The true gravitational center of the show lies, however, in the figure of Yasmeen who, by involving the public, on the one hand opens up the great potential of an instant intimacy that a similar situation can give, but which, at the same time, creating and using well-designed instructions determined, it creates for the spectators identity limits that are as precise as they are difficult to cross.
The position of power of the choreographer who tried to erode in front of the much coveted audience engagement really falls? Maybe the authenticity is only apparent, but Godder seems to be fully aware of it, thus confirming absolute domination over the situation. This is also to be seen in the face of the merely choreographic choices of the show, with movements that are always excessively pathetic for bodies exasperated almost to the spasm, in a physical-aesthetic sentimentalism that is close to touching the ridiculous. Emotions that can be shared and shared by all, therefore, yes, but without forgetting the other side: from banality to the highest humanity, in a spectrum that knows no continuity solutions, and that offers the viewer the opportunity to experience their own emotional self. 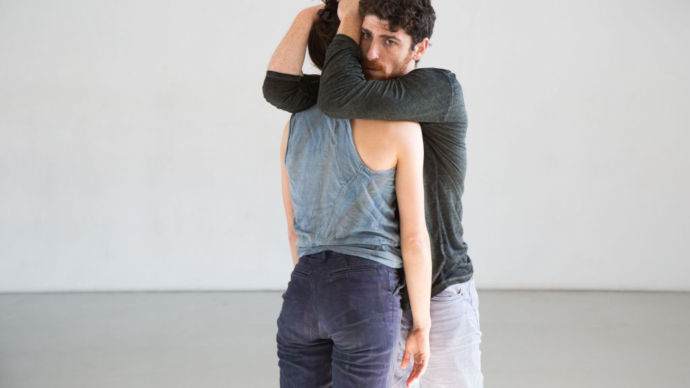 To confirm the centrality of Godder's presence within the 2019 festival just look at his other upcoming show: "Stereotypes Game", designed for teenagers.

The audience is seated directly on stage and is called to enter the work guided by the excellent Shuli Enosh and Ofir Yudilevitch , capable of using some extracts from the choreographer's most recent works as living matter for a reflection that does not detach from the body's mind.
The two performers show - and reproduce - a real anthology of gestures, followed by a series of questions for the spectators on the implications that those same movements have in stereotypical terms, and especially in relation to what is male and what female . Leaving some movements in the middle, perhaps stuck with their backs reclined, the two figures on stage are not afraid to question the viewer, coming to show with extraordinary simplicity - and, one would say, frightening clarity - as much as our way of thinking about the body and his poses both related and submissive to a role play that has strictly to do with gender stereotypes.
The open problematic does not stop, however, only here, if it is true that precisely dance - especially in its manifestation in the form of a ballet - is the first accused as a great supply basin of this sky of fixed ideas: to put - it asks us perhaps the work - again in motion, to be brought back to the states of fluidity and gaseousness.

The playful character that characterizes the whole "Stereotypes Game" is perhaps the element that confirms its essential and all-pervading depth, with a lock that, after having made the public move on imaginary lines - ideal contours of a real concrete spatialisation of stereotypes - does nothing but drop the latter, deconstructs them to bring them to exhaustion in themselves, seeing them finally fall into the simple feather-weight of the body.